Often when people find out I’m an artist, they will lean in very cautiously, and embarrassingly admit to me that they just don’t “get” most art being made today. They try to understand it, they tell me. But it just doesn’t make sense to them. They are a victim of art shaming.

Art shaming is rampant in the contemporary art scene, and it adversely affects many of us. But it doesn’t have to be that way.

There is a children’s tale I am fond of called The Emperor Has No Clothes. In it, a hoodlum convinces the Emperor that he is the best tailor in the world, and will make him the most beautiful suit humankind has ever laid eyes on.

When the Emperor tries on his new “suit”, everyone congratulates him on his beautiful suit and are afraid to say the Emperor is naked because it means they are stupid. So the Emperor goes on parade to show off his new invisible-to-stupid-people suit, and a child in the crowd points to him and asks why the Emperor has no clothes.

The child is the only one with an Innocent Eye, the only one in the crowd who is able to truly see without being blindsided by the labels and the “expert” in the story.

Many people don’t understand the majority of Modern Art, but most of us are afraid to admit it.

It’s like admitting you can’t see the Emperor’s suit.

We are art shamed into going along with the experts’ narratives even as we experience cognitive dissonance between what we see and what we are told is great artistic mastery on par with a Da Vinci or Hokusai.

Smart people are supposed to “get” Modern art whether it makes sense to them or not.

I’m a licensed art teacher, a professional artist, and a recognized expert in the field of art. And I am here to tell you I don’t get most Modern Art, and it is ok if you don’t get it either.

It doesn’t make you stupid to look at a can of human feces and not understand why some people think it is monumental or Earth-shattering.

It’s ok to look at a Jackson Pollock painting and think to yourself, “My child can do that!”  As someone who teaches art to children, I can assure you that dripping paint on a canvas is cognitively something a child can absolutely do, as I am sure you already know.

There is no reason to be ashamed of not liking a work of art, or to allow anyone else to art shame you for a perfectly valid opinion.

When we allow ourselves to use our Innocent Eye and not rely on experts weaving invisible suits, we get the joy of using our own judgement and discovering our own aesthetic preferences.

We don’t depend on interpreters to tell us what foods we like to taste or which books we like to read, although we might appreciate recommendations.

Art doesn’t have to be any different.

Do you feel visually moved by the machine spilling blank pieces of computer paper from above? If you do, great. If you don’t, that doesn’t make you dumb.

And if a supposed artwork is stupid to you, you can say so with confidence, the same way you might say “I don’t like anchovies” or “I can’t stand Orlando Bloom’s acting outside of Lord of the Rings”.

It is not surprising that there is so much generalized insecurity in the population about understanding art. Branded Artists and the Museum Elite love purposefully setting up laypeople for failing to recognize what curators claim is a masterpiece, and then art shaming their victims.

In 2001, Damien Hirst created a work consisting of beer bottles and coffee cups which was, unsurprisingly, thrown away. There was much to-do about how a very important work was not recognized by the person who cleaned the space, subtly implying ignorance and stupidity onto someone who saw garbage and threw it away.

In 2004 a bag of paper and cardboard, a work by Gustav Metzger at the Tate Museum, was thrown away. Again, the buzz in the art world swirled to shame the perpetrator who ignorantly disregarded what the establishment elite had labeled great art.

In 2014, Sala Murat left some cookie crumbs and newspaper in a gallery which was, of course, thrown away.

Frankly, I would have done the same.

Garbage-as-art is continuously set up specifically for the art elite establishment to look down on the unknowing public by purposefully creating a situation where the “art” would be thrown out by people not in the know. This exclusive circle of decision-makers weave invisible suits, and otherwise intelligent people doubt their abilities because it simply doesn’t make any sense.

Garbage-as-art is just one of many games so-called authorities play to enforce their art shaming onto the public.

Be Your Own Art Critic

I hereby give you permission (not that you need it) to use your own judgement about art. You are entitled to your own aesthetic and to surround yourself with your definition of beauty and good art.

It’s time to stop giving an elite art oligarchy and their crazy-making games complete control over who is allowed to interpret art.

Let’s end the art shaming once and for all. Like the art you like. Hate the art you hate. And own it without fear of ridicule. There is no reason to be ashamed of not understanding something that makes no sense to you. In fact, it is quite brave to inform the Emperor that he is naked.

Have you ever experienced something being presented as art that didn’t make sense to you? Let me know in the comments below.

“A painting requires a little mystery, some vagueness, and some fantasy. When you always make your meaning perfectly plain you end up boring people.” –…

What makes a bridge strong? Is it the materials used, or the engineering technology employed in its creation? Is it how much weight it can…

Is atelier training Eurocentric art? When considering mathematical concepts, rarely do people worry if the Pythagorean Theorem came from Ancient Greece, and that the symbols… 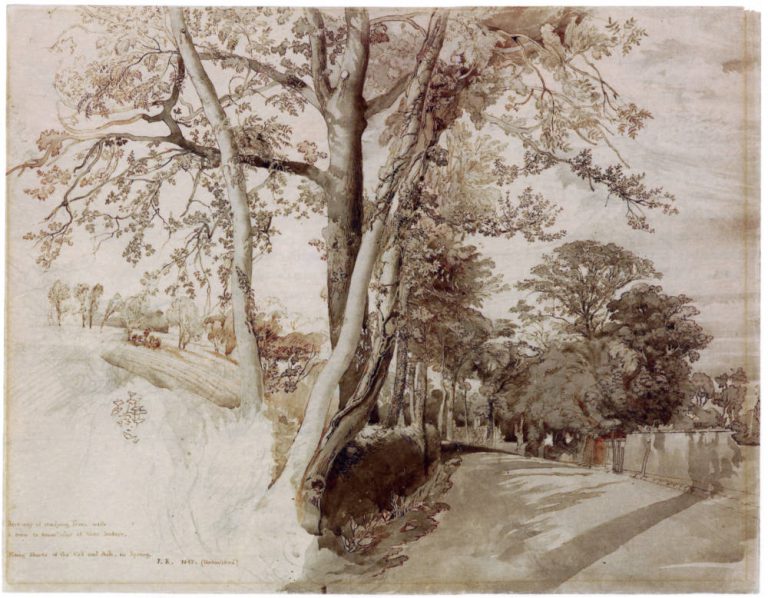 Tree Study by John Ruskin (1819-1900) Ruskin Foundation, Ruskin Library, Lancaster University “That woman poached a couch and skinned it!” This what my friend and…